After spending a week in Phnom Penh the bustling capital of Cambodia I went to a travel agent and purchased a bus ticket on Mekong Express Limousine Bus lines to Siem Reap on the northern part of Cambodia.  You never know what you are going to get when you book a bus as the travel agents are biased to certain bus companies and often offer a lesser less convenient service.

All aboard as I am picked up at my hotel and delivered to the Limousine Bus which was as the name implies.  After adjusting my very comfortable seat with ample leg room the female bus attendant gave each passenger a sandwich and a bottle of water and the bus had a toilet in the back of the bus…which is really a nice luxury to have especially on long trips.

You can tell immediately If you have a good bus driver as he shifts smoothly and keeps the bus at even speed without passing on curves, blowing his horn. as if that would make a difference to a water buffalo or turned over tractor trailer truck on a blind curve. This bus trip was absolutely amazing and gave  passengers time to enjoy the scenery consisting of  huge rice fields, water buffaloes, cattle egrets and small towns as we proceeded north.

We had a twenty minute snack break with local foods and a sit down restaurant. We arrived in Siem Reap in five hours even though the agent said it was six hours.  Bus stations are a challenge worldwide…you never know exactly where the bus might stop and then get your next mode of transport to the hotel district.  Thank god for the internet since it told you to either take regular taxi (expensive) or take local tuc tuc with the exact fee to pay.

I hopped in the first tuc tuc and negotiated the price to the tourist area and off I went like royalty in their well appointed tuc tucks with comfortable seats and open air to take in the sights as you motored along.  Siem Reap is a bit of a mystery as you cruise along wide treed streets with French Architecture and well appointed corporate and local buildings nestled into the landscape. 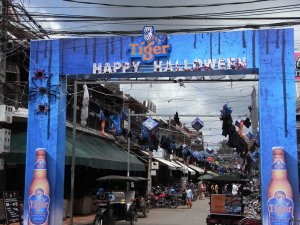 Immediately you think to yourself this city has style and would be an excellent place to hang your hat for a while.  It has fresh bakeries, many excellent restaurants, coffee shops everywhere, many churches and religions, hospitals and local clinics, and an entire block called Pub Street which is a great place to take a beer, eat in its many restaurants, ideal for a night out of bar-hopping, enjoy local bands or just people watch.  It reminds me of New Orleans during Mardi Gras, but here the party goes on every night of the year.

Another plus factor about Siem Reap is the cost of living is quite reasonable and a retiree could easily live here for under $1000 per month.  Hotels run the gamut from cheap to expensive and I found a brand new boutique hotel with a large room for $300 dollars a month and had its own bar and healthy cuisine located in the green area only five minutes from down town.

What draws millions of visitors to Siem Reap is their ancient temples called Angor Wat. Angkor Wat is a UNESCO Archaeological Site and is listed as the 7th Wonder of the World. 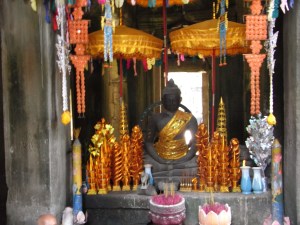 Angkor Wat is the ultimate expression of Khmer genius – an awe-inspiring temple that is stunning for both its grand scale and its incredible detail.  Angkor Wat, in its beauty and state of preservation, is unrivaled. Its mightiness and magnificence bespeak a pomp and a luxury surpassing that of a Pharaoh or a Shah Jahan, an impressiveness greater than that of the Pyramids, an artistic distinctiveness as fine as that of the Taj Mahal. Angkor Wat is located about six kilometers (four miles) north of Siem Reap.  Listed as one of the best travel destinations in the world… Angkor Wat will not disappoint.

Another adventure which should be on your list is a river tour to Tone Lake Sap area where you can take a local boat and  experience river life at the small town of Kampong Khleang which feels genuinely untouched and peaceful.  You will see stilt houses as far as the eye can see. More than a village, Kampong Khleang is a small town with its schools, its 3 pagodas, its clinics and everything such a large community requires to function. For those of you who have never seen such things before, it is a truly mind-boggling experience.

Once your boat navigates away from the stilt houses, you will enter the “actual” floating village: several dozens of wooden houses floating on the river. The village moves along the river according to the seasons, and even sits on Tonlé Sap lake during the dry season. Just amazing.

One of the best things about Kampong Khleang is that the boat service is still owned by the locals, which means that the money we spend on the boat trip gets back to the community. We really hope it remains this way.

So there you have it Siem Reap is a hidden gem that has something for everyone and should definitely be on your bucket list as a travel destination.

QUOTE: “If a picture is worth a thousand words, why did God invent captions?” -David Mellonie

THINGS YOU MAY NOT KNOW: Angkor Wat ( or “Capital Temple”) is a temple complex in Cambodia  and the Largest Religious Monument in the World, with the site measuring 162.6 hectares (1,626,000 m2; 402 acres).[ It was originally constructed as a Hindu temple of god for the Khmer Empire, gradually transforming into a Buddhist temple towards the end of the 12th century.

THINGS YOU MAY WANT TO SAVE: Our Historical Temples…they are a reflection of who we are.

ZENTRAVELER SAYS: If you plan to go to Siem Reap, Cambodia you should be dressed like the famous Indiana Jones, carry a professional looking camera, some round spectacle glasses and a leather bound copy of poetry in your back pocket.  Also Beards are welcome as you mingle with the pseudo-intellectuals who are sipping strong coffee, munching on French croissants and vividly re-living past civilizations.

From here to Infinity is a relatively short ride! The next leg takes eons and eons as you fly through the Barycentric Dynamical Time Zone! …and on and on and on.  Follow the Zentraveler Blog often for Travel, Health and Zen-like stories and such. Where else can you get a three in one blog for the price of free?